The Field of Dreams, Inc. Morrett Sports Complex Endowment supports the maintainance of the buildings and grounds and provides additions to this sports and recreational complex serving the Wabash County area youth and adults. 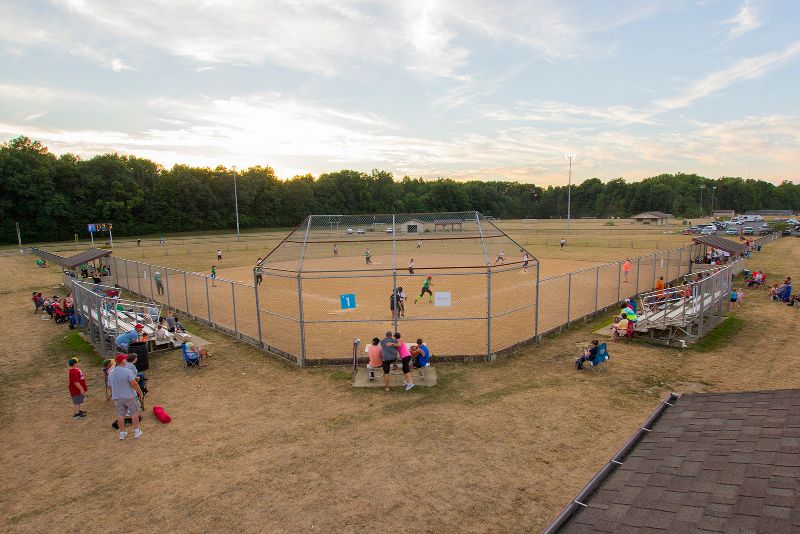 The dreams of many a sports enthusiast in Wabash County were realized on September 5, 1999, when the Morrett Sports Complex, popularly known as the “Field of Dreams” opened. The opening culminated several years of local fundraising efforts, surveying, and construction of the actual athletic facilities. is located on the north side of Wabash at 10 Water Ridge Parkway. The facility is just off of Manchester Avenue (State Road 13).

In 1989, a group was formed to do a feasibility study on youth and adult athletic facilities and community participation. The conclusion was that the community was interested and would help to fund the construction and endowment of the project. A committee was formed to head the fundraising efforts. Once a significant amount of the money had been pledged, the search was on for suitable land to purchase on which to build the complex. Efforts were also being made to form a plan for the actual moving of dirt and laying out of land to construct athletic fields.

Wabash Community Service Inc., (now the Wabash County YMCA, Inc.,) was searching for suitable quarters for its expanding programs. After a comprehensive search for land, interest centered on a 52.8-acre plot of land on the north side of the city of Wabash a quarter of a mile west of Manchester Avenue. Actually, there are another 20 or so acres that front the property on which the Water Ridge Parkway crosses to get to the land that was purchased from the Morrett family for the construction of the athletic fields.

At about the same time, Wabash Little League, Inc. was looking to expand its efforts. They were interested in consolidating their different leagues into one main location. For many years, their four divisions had been nomadic, having been in several locations around the city. Little League officials realized that their program was outgrowing its boundaries, and its program had scheduling issues. Therefore, looking for one central location was becoming a huge need.

In 1995, Field of Dreams Inc., a non-profit organization was formed to oversee the project. This organization was made up of members of Wabash Little League, Wabash Community Service (YMCA), and the Wabash Babe Ruth League. The organization was and is still, the umbrella corporation that oversees the facility.

Wabash Little League has 4 baseball fields on the north side of the facility with room to expand. There is a plot of land to the north of the diamonds that will be used to house the Little League Junior-Senior divisions, the former Babe Ruth League, that currently plays in the City Park.

To the south of the Little League facility, there is a 532-space asphalt parking lot that is shared with the YMCA. The west end of the complex has two soccer fields that serve the YMCA soccer program. South of those fields is a football facility that the YMCA uses for youth tackle football and youth flag football. To the south and east as one enters the facility are 4 regulation softball fields that are used for girls youth softball, church league softball, co-ed softball and can be used for adult men’s and women’s softball. All facilities have restrooms and concession buildings included. A nature trail was built in 2002 that connects the complex with O.J. Neighbors Elementary School’s parking facility on Wabash Street. Walkers, joggers, and bikers use the trail to view wildlife, exercise or just to enjoy the climate.

All of these years later, the Morrett Sports Complex is an important part of the Wabash community and will be for a number of years to come.